“I didn’t start out being a hard worker,” she said. “In fact, I’m physically lazy. I assign people things to get work done.”

Can you imagine that?  An entrepreneur who built a multi-million dollar skin care company while homeschooling 14 children naming herself among the slothful?

She’s apparently set the bar high because she also doesn’t feel that she has, as they say, arrived. There’s still too much to do. With her family. With her company. With the world.

Tammie Umbel travels to Third World countries for natural products to create economic opportunities for their citizens. To save forests, too. To save wildlife.

On all fronts, the job is far from finished.

“I’m not super excited until I hit all the retailers, and I’m on all the shelves I want to be on,” said the founder of Shea Terra Organics, maker of skin products like Rose Hips Black Soap Facial Wash for acne and Black Seed Oil for eczema. “I’m not there yet. I don’t have all my kids in college yet. My company’s not as widely distributed yet. When I’m there, I’ll feel successful.”

Perhaps it’s that goal-driven attitude that prohibits 45-year-old Umbel from putting herself in the category of other successful entrepreneurs. All her life she’s wanted to accomplish things — big, impactful things. She grew up hurting for people and for animals. She saw them on television. They lived in places that, as an impoverished child, she could only dream of visiting.

Umbel grew up in Maryland, but she considers herself a child of the Southeast because of her family connections to the region. Her mom had an eighth-grade education. Her father wasn’t present. She lived on 39 cent hamburgers, but Umbel knew greatness was within her. “I didn’t identify with all that. That wasn’t me,” she said. “That wasn’t my future. [I was] going somewhere. When I was 3, I used to tell my mother I was going to be a lawyer … and the first woman president. No one ever told me you can’t do that.”

At 16, she met her husband, Syed Ishaq, at a mosque. He’d recently migrated to the States from Pakistan. Of 15 percent German ancestry, Tammie Umbel had always been fascinated with different cultures. She watched public television commercials about hungry children living with “bloated bodies and flies” in far-away lands. Her best friend was from Korea. After getting married, she visited her husband’s native country. She felt television romanticized the place. “It’s not the same when you see it in person,” she said.

At 18, she had her first child. Before the Internet became a popular spot for selling things, Umbel started a clothing company that specialized in ethnic wear. She created swatches and carried them from place to place. “You had to match sizes. There was a lot of tension. Stress. I shut it down and said I’d never start another company.”

She was the mother of four by then. Fast forward six years and additional children. If she was going to create economic opportunities, to be an employer, she’d have to get involved in something she believed in, Umbel decided. Not a mere job. The images of the impoverished in countries far away still hung in her mind. She wanted to help them. Without negatively impacting the planet. And then she noticed the women at her mosque.

Umbel and her husband lived in Washington D.C. and attended a mosque near Embassy Row, where women from all over the world lived and worked. “They had these unique ways of beautifying themselves naturally,” Umbel said.

Her entrepreneur brain fused her passions into what has become a 20-year-old brand, Shea Terra Organics, with 300 product lines – including soaps, oils, body washes and lotions. Her business is based near Dulles International Airport in Washington, D.C., where she employs about a dozen people. Shea Terra, which can be found in Vitamin Shoppe stores, also has a vital online presence. Umbel typically manages operations from her home a half-hour away from the factory and spends her workday with kids in tow while her husband works as a kidney specialist. Their youngest child is 5 and their oldest is 26. Six of them are in college.

The family works together on household tasks. Her husband, for example, likes to cook.

“We just keep moving,” she said. “For me, it’s like if you have an hour on your hands, you find something you could be doing. We don’t have a schedule.”

Though the youngest children usually travel with her, Umbel expects to take her first work trip without them this year. She’s headed to Las Vegas for 10-minute meetings with buyers who represent stores like Whole Foods and Sprouts. She hopes this will propel her product onto more shelves.

The children also have traveled to far away countries with Umbel in search of ingredients that work on skin and help the impoverished yet do not adversely impact the environment. Ingredients in the Rose Hips Black Soap – made not from lye but from a plant – come from a woman in Nigeria. Marula oil originates from a Christian woman who began harvesting it from wild trees after losing her job in a diamond mine in the Republic of Namibia. Rose Water comes from a women’s cooperative in Morocco, from a valley where roses have “the most beautiful perfume.”

She says it as if she’s smelled the roses herself and, in fact, she has.

Her commitment to customers is that she’ll never “water down” or change her formula to be anything other than truly natural.

The co-founder and executive director of Wildlife Friendly Enterprise Network, Julie Stein, became acquainted with Umbel five years ago. One way the organization protects wildlife is by certifying products to assure consumers that a product was harvested or created in a way that nurtures the coexistence of people and nature. Its registered trademarks include Certified Wildlife Friendly® and Wildlife Friendly®. Umbel uses its certifying services.

“Tammie, like many of the eco-entrepreneurs who are interested in sourcing our Wildlife Friendly™ ingredients, has a strong interest in products that support local communities, honor indigenous knowledge, and protect wildlife,” Stein said. “We love working with companies like Shea Terra that believes in our mission and vision for the world.

“We want to give consumers a way to vote their values with their purchases, and forward-thinking companies like Shea Terra Organics allow that to happen,” Stein said. “The guidelines which govern our certification mean that products with our label, by definition, protect watersheds and support other ecosystem services like clean air, healthy soil, as well as thriving wildlife populations. In an environment where wildlife thrive, so do people. We believe that empowered consumers can change the world — but consumers need like-minded companies that are willing to do the hard work and research to find truly sustainable products.”

Don’t doubt, Umbel is up to that challenge. Up to hard work.

The market is “hugely conscious” about protecting the environment compared to when she started, according to Umbel, but she isn’t satisfied with the pace of progress. In fact, she is willing to be bought out in exchange for a bigger platform for the cause.

“There’s so much work to be done, and we’re fighting against the clock,” Umbel said. “I don’t have the means to make that issue big enough in people’s minds, so people need to realize how their purchasing power is affecting wildlife. My hope is that I’m either going to find a company that really wants to promote me … Or a really big company that will buy me out and stick to what I’m trying to do.”

In the meantime, Umbel is likely to be in South Africa, and perhaps Ethiopia, working hard and saving one piece of the world at a time.

This exclusive feature was published in The Connect’s Summer 2018 issue. You may purchase the full issue here, or download the digital version here. 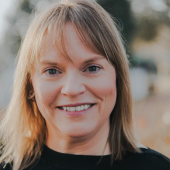 Toni Lepeska’s diverse career in journalism spans 27 years and includes coverage of the criminal justice system, community growth and development, and business start-ups and expansions. After a temporary stint at USA Today, she worked at The (Memphis) Commercial Appeal, primarily writing about government and neighborhood issues in Olive Branch, Miss., identified as the fastest-growing city in America in 2011. Toni is currently a freelance writer who enjoys human interest stories that inspire readers to persist toward great things. She blogs about her own personal journey of healing and the transformative impact of grief at www.tonilepeska.com.

Mixtroz: This Mother-Daughter Duo Is Putting the Quality Back in Connections

Anxious, Overworked & Unfulfilled? This Psychologist Says Self-Monitoring Is the Remedy